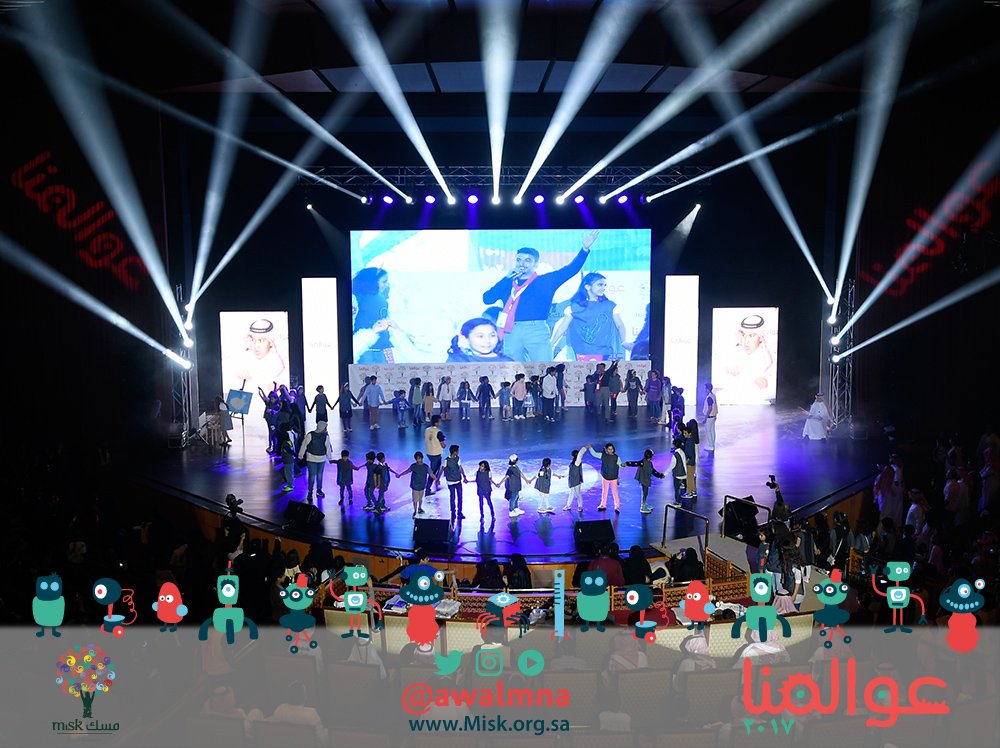 27 children came together to draw creative scenes on the stage of the Awalmna event, organized by the Mohammed bin Salman bin Abdulaziz Misk Foundation, today Saturday at the King Fahd Cultural Center in Riyadh under the slogan “I follow my instinct”.

Educational and technical innovations were also presented, in addition to showcasing emerging works in acting and visual production, live painting and drawing, and competitive sports exhibitions on stage.

In front of an audience of over 2500 people, around 200 children formed a luminous electric circuit on and around the stage, by interlocking their hands until the circuit was complete and a luminous energy was produced.

One hundred and seventy children volunteers participated in organizing this entertaining and inspiring event, aimed at encouraging children to be creative and develop their skills through presenting their stories in front of their friends and families, training them to work with team spirit, and getting them used to taking responsibility and revealing their potential, in addition to preparing a generation of young volunteers and spreading the culture of volunteerism, in line with the Kingdom’s Vision 2030.

Misk Foundation aims at uncovering hidden talents and honing them by developing both personal and performance skills, as well as training children to use self-learning tools and develop their capacities. This is in addition to enriching children’s imagination and training them to develop their ideas, and create innovative worlds which allow them to see their world with fresh eyes, as well as empowering children to reveal their talents and share their innovations.

The even, that lasted for three hours, focused on two major axes, the Speaker session, where young bearers of wisdom and senior educators inspired the children by sharing their innovative worlds, and the Talent Show session, where a number of children showcased their talent, innovation, and skills in the fields of arts, sciences, and technology in order to motivate and support their peers.

Du’aa Baa’sher spoke about her talent in rapid mental calculation, where she has innovated an easy and smart way to calculate in mathematics, which led to her helping teach70 children this method.
Young Shahinaz Al-Suba’i talked about positivity, inspirational quotes and reading, while Abdullah Al-Sha’lan spoke about his passion for cooking through a musical show with “Tala” who shares the same passion.

The event also showcased children’s skills in acting and visual production, where young Mohammed Al-Fantoukh spoke about his experience in film photography and production. Abdulrahman Al-Zahiri and Abdullaj Al-Baqmi presented their experiences in acting, producing and directing, while the intermissions included live art exhibitions of children drawing.