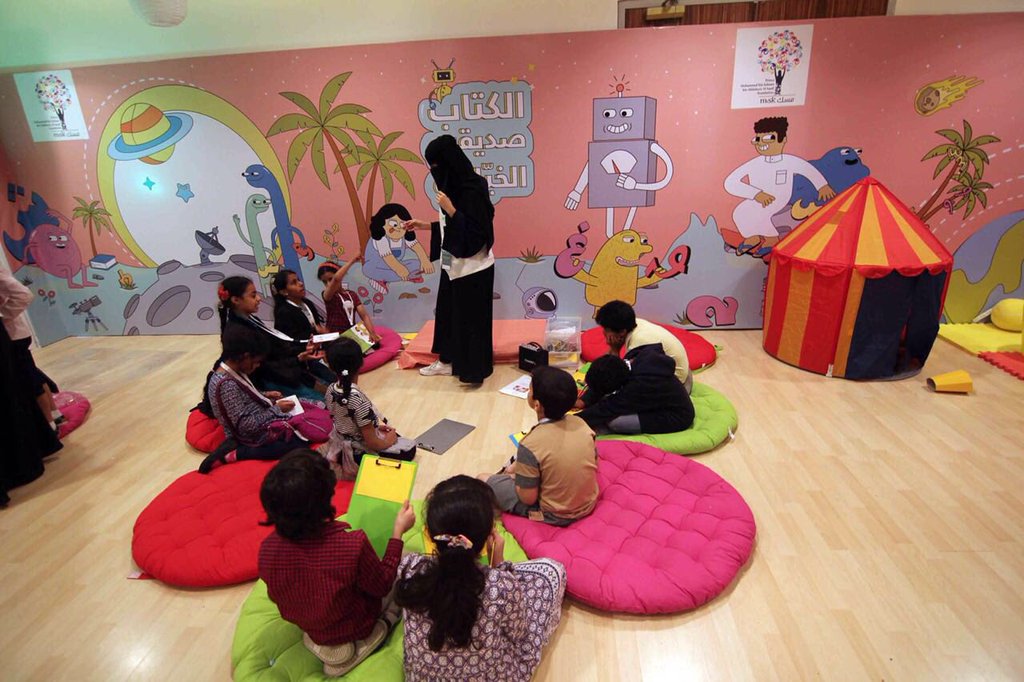 At the entrance of one of the main corridors at Riyadh International Book Fair, a 5-year-old child was holding his 8-year-old sister’s hands and convincing her to visit the Prince Mohammed bin Salman bin Abdulaziz “MiSK” Foundation wing to explore the cultural and intellectual activities at “Once Upon a Time” Child Corner.

The corner’s name, “Once Upon a Time,” attracted children of all ages to visit the “MiSK Foundation” wing and enrich their minds by its entertaining and fruitful activities.

The educational and cultural activities provided by MiSK Wing were not limited to children only but also young people who are interested in writing stories by directing them towards publishing their very first books. On a daily basis, MiSK Wing held seminars gathering young people with numerous young writers and authors to share their experiences as well as workshops in writing and composition.

By its participation in Riyadh International Book Fair, “MiSK Foundation” aimed at engaging creative young people in interactive workshops in the fields of literature and culture. It also aimed at discovering young national talents in literature as well as developing, encouraging, and supporting the young promising potentials.

The child corner “Once Upon a Time” was devoted to encouraging children to read books, write stories, and speak classical Arabic. It also aimed to foster children’s imagination and enrich their knowledge through enjoyable activities.

The “Once Upon a Time” corner included six platforms. The first one was the “Blossom Corner” for less than 5-year-old children and it aimed at developing the skill of role-playing. It also included the inspirational platform that offered workshops to improve creative writing and drawing.

The second corner was the “Wall of Writing” on which children collaboratively write their creative stories. The third corner was the “Maze Planet” which provided eight interactive stations, each one held a name representing its activity.

The fourth one was the “Recycling” corner in which a two-meter high model was built out recycled items. The fifth corner was the “Electronic Platform” which was concerned with Arabic applications to encourage reading. The last corner was the “Challenge,” in which intellectual activities were held to enhance the mental and intellectual abilities.

According to the latest statistics, “Once Upon a Time” corner witnessed a spike in the number of visiting children. At the beginning of the Book Fair, about 200 children visited the corner then it reached 2,100 children aged between 3-12 years old.