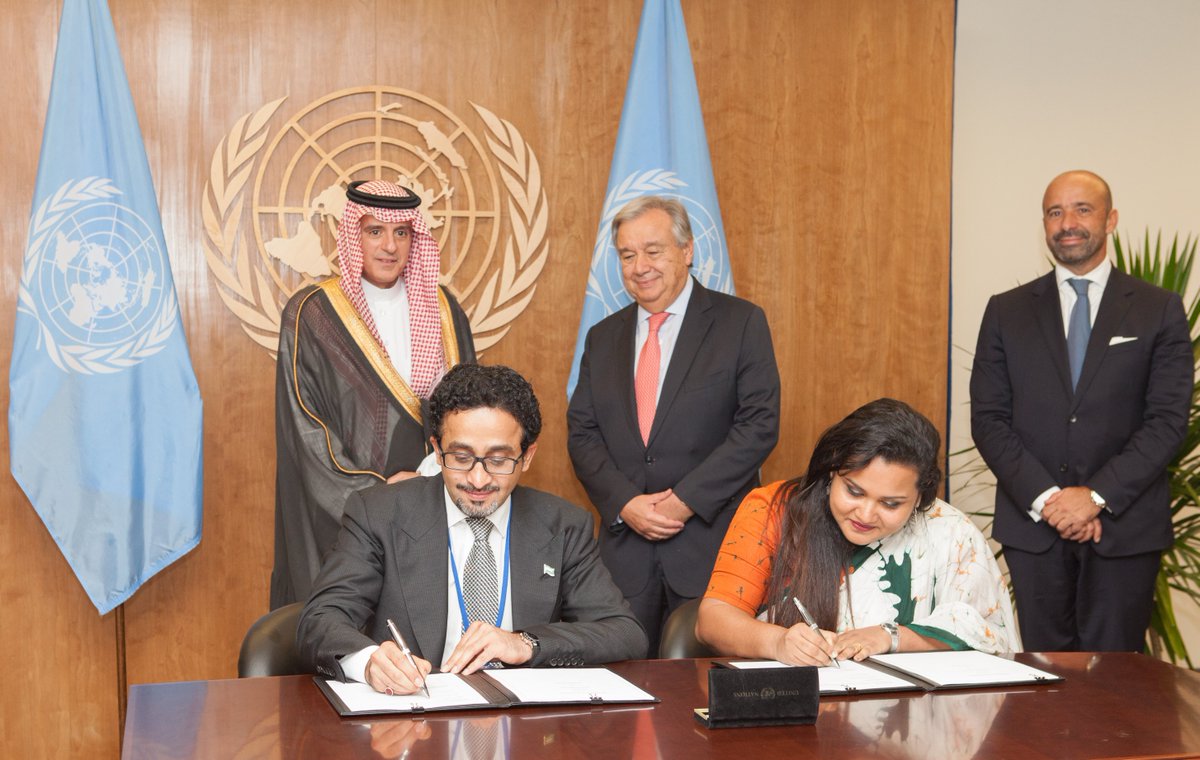 A new agreement to boost support for the UN’s youth-related work around the world was signed today at a ceremony in the UN’s headquarters in New York by the Misk Foundation and the Office of the UN Secretary-General’s Envoy on Youth (OSGEY).

Misk Foundation, a non-profit philanthropic foundation established in 2011 by H.R.H. Mohammed bin Salman, Crown Prince of Saudi Arabia, has become a strategic pioneering partner of UN OSGEY and will support their work around the world. Misk’s mission is to discover, develop and empower young people to become active participants in the knowledge economy both in Saudi Arabia and globally, through partnerships such as this.

At the strategic level, the two organizations will facilitate greater action at the global, regional and national level, to improve the situation of young people around the globe. The partnership will strengthen UN OSGEY’s capacities to deliver the UN Strategy on Youth and, in so doing, aims to directly reach and mobilize 50 million young people globally towards the achievement of the Sustainable Development Goals by 2030.

Under the initiatives pillar, young people’s leadership, creativity and innovation skills will be harnessed to bolster their ability to be agents for positive change during the run up to the fifth anniversary of the SDGs in 2020. Adding to the existing ‘Young Leaders for the SDGs’ initiative, a ‘Youth Gateway’ central knowledge hub on SDGs is planned, including a platform to map existing initiatives and provide opportunities for engagement, aimed at motivating more young people to take action. Tools will be developed to measure and track global indicators on youth development and well-being.

UN OSGEY’s capacities to promote youth participation in UN-led processes will be enhanced, including through annual youth meetings during the UN General Assembly and the High-Level Political Forum in New York.

Additional partnerships are planned, such as supporting the implementation of the UN’s Global Initiative on Decent Jobs for Youth, particularly in the areas of youth entrepreneurship and digital skills. The two organizations will also co-develop initiatives, programs, and engagements that aim to increase youth contributions to the 2030 Agenda for Sustainable Development.

His Excellency Bader Alasaker, Chair of the Board, Misk Initiatives Center, said:

“The Misk Foundation is committed to helping as many young people around the world realise their potential in the future economy and to encourage active global citizenship. The strategic agreement that we are signing today shows our commitment to this mission. Partnering with the 2

United Nations will greatly enhance its vital work around the world to help young people from all backgrounds to realise their potential and meet the Sustainable Development Goals.”

Commenting on the partnership with Misk, Ms. Jayathma Wickramanayake, the UN Secretary-General’s Envoy on Youth added:

“This major contribution towards the UN Secretariat’s work on youth will be used to operationalize the new UN Strategy on Youth with a focus on advancing our collective efforts to support youth mobilization for the 2030 Agenda worldwide. It comes at crucial time, immediately after the public launch of the UN’s Youth Strategy, which shows the commitment and dedication of the Misk Foundation to supporting youth development globally.”

Through this agreement, Misk becomes the first non-government organization to make a direct pledge towards the implementation of the UN’s first-ever Strategy on Youth that was launched by the UN Secretary-General António Guterres at a high-level event on 24 September 2018, one day prior to the signing ceremony.